On the Way to Mexico’s Bajio 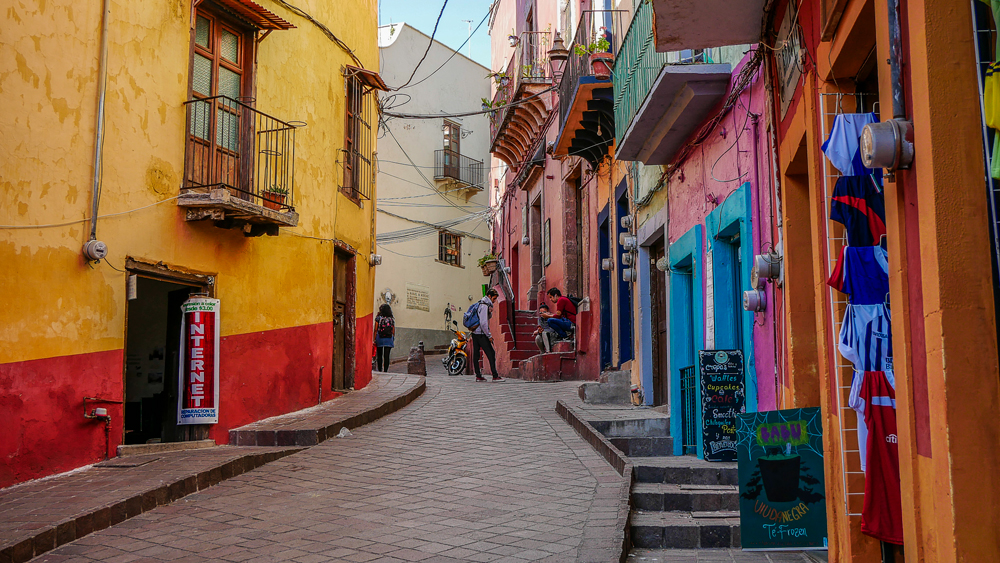 After the sensational Dia de los Muertos we finally leave Mazatlán on 3rd November. Towards Mexico’s heartland. Well, today just to Tepic. Some 250km on the highway.

Driving Mexico’s highways – at least at the beginning enough reasons not to be too much amused about the country’s quite unreasonable tolls. About 15 US Cents / km.

Later it improves. All toll collection points are occupied by protesters. To keep peace with them 20 Pesos are ok at each post.

We pass thru Sinaloa’s lowlands, could be more interesting, later, after having entered the state of Nayarit the landscape becomes hillier, finally we climb up to 900 m to reach Tepic in the afternoon.

Tepic, the proud capital of Nayarit seems to be pretty rural’n’sleepy. A very small CBD surrounded by extensive, rather poor suburbs.

… astonishingly heavily secured for such a small town.

Next morning on to Guadalajara. Some 200km through the highland. On the way a short visit to famous Tequila.

Approaching Tequila, we drive thru a scenery, which in 2006 was declared a World Heritage Site: the Agave Landscape.

Seems to be a real hotspot for Mexican tourists. Definitely Tequila has a pretty nice historic center. Well restored, well maintained. Nevertheless, it’s a kind of over-kill with attractions for the numerous tourists coming from all over the country to learn where the world-famous drink is coming from. Of course, with numerous opportunities to buy some bottles.

… and were else in the world can you make a sightseeing tour in an agave plant.

After some time, it just gets too much.

We drive on to Guadalajara – Mexico’s 2nd largest city.

Approaching the city, we’re impressed by its modern appearance, its efficient traffic lines and how easy it is to drive right into the center of such a big town. Nevertheless, in the very center of town it’s getting slightly more challenging to find our way with a GPS on strike and 100s of narrow 1-way lanes. Whatever, after some time we make it, even find a secured parking for Prado and some accommodation for us.

Well, walking thru the city center we get the impression of a rather grim and rundown environment. Not the ease and the friendly atmosphere of other Mexican towns we’ve visited so far.

But of course, there’s more than the city center’s lousy side streets. There are the 4 big squares with their baroque churches, their adjacent palaces and their elegant houses in the very heart of the town. All carefully restored and maintained. An area pretty different to its neighborhood.

And of course, we discover the adequate watering hole to admire the whole splendor of this medieval architecture: Las Sombrillas. Probably more for a drink than for something more substantial.

A visit to the sumptuous cathedral …

… and the Rotonda de los Jalicienses Ilustres – the place of the local celebrities. Visibly the guys are in desperate need of a spa.

The huge Plaza de la Liberacion, where everybody gets the ultimate proof of his/ her visit, …

… on the other side the famous Teatro Degollado – definitely a traditional, culture infested place. Unfortunately, we miss twice the opening hours to visit its famous interior.

A visit to a World Heritage Site: the Hospicio Cabañas with its monumental frescos on the ceiling.

For a change – Mercado Libertad. With a huge selection of all kind of goodies.

If you’re still not convinced of Guadalajara’s offer – there’s an alternative for you: the city’s creepy cabinet.

Should you not like any person in this cabinet, there’s another option: a leftover from EL Dia de los Muertos – an exhibition of Catrinas.

Time to move on. Some 300km thru Mexico’s highland.

Quite fast until we reach the outskirts of Leon – just a few km before arriving at Guanajuato.

Suddenly it becomes clear that Prado feels pretty neglected. It seems the spa in La Paz wasn’t enough for its ego or we don’t feed it correctly with this delicious sulfur rich Mexican diesel.

Who knows. Suddenly it produces a huge cloud of white smoke and loses all its power. We stop on the highway. It improves, then again, the same – and again.

What the hell. Time for a car doctor. Slowly we drive to nearby Leon. Fortunately, it’s a big town. By now Prado drives as usual. After 1/2h of intense search we find a diesel specialist. 1 of these labs that can identify more problems with your engine than you ever imagined.

The mechanic even revitalizes an old computer still able to examine Prado’s interior. Nothing wrong. A manual check. We ask the guy everything we could imagine – and all in our modest Spanish. Still no result. What to do – finally we pay the moderate bill and move on to Guanajuato. Without any further incident. No idea what problem prevailed – maybe the guy is right, it could just be a little bit of water in the diesel. Just a few drops. Definitely not more than that.

Should your car need a check-up somewhere around Leon: Turbo Inyecion Diesel SA.

Guanajuata – one of Mexico’s most fascinating cities and probably for the odd tourist the most complicated town to find anything on his own wheels.

Not because Mexicans drive so badly, or roads are not passable. No, it’s all about their narrow’n’winding roads thru the town and the fact, that they have them on 2 levels. The ordinary roads as usual in any town and their tunnel system – just a floor below, in the underground. The GPS leads us up to 20m to our accommodation – on the upper floor. Unfortunately, there’s absolutely no way to stop.

So, we have to move on. Suddenly we’re in the underground. Again, we drive to the place we search. Definitely we find it. Just, we’re 5m below the entrance. But there’s a place to stop. Finally, Monika organizes some help – and soon later we’re guided to our accommodation. We would never have found the way by ourselves.

In the meantime, it’s night. Seems to be the time when life starts.

Well, famous Guanajuato – everything slightly exaggerated to any other place: too many partying people, too many competing mariachis, too bombastic houses, churches and temples, too colorful houses and of course a town too rich to be real (at least a long time ago). For over 250 years the area produced about 30% of the world’s silver. And all this earned money somehow had to be spent.

And visibly, in the meantime Guanajuato is really renowned in the world. We even discover a Chinese tour group. The very 1st 1 seen in Mexico.

But let’s start. With a more bombastic square hardly to imagine: the Jardin de la Union with the Teatro Juarez, …

… or a funeral at the Basilica developing into a parade of exquisite horses thru town.

Of course, there are also the areas of the less wealthy, ordinary citizens. On the slopes of the valley.

And after hours of strolling thru narrow lanes, sumptuous plazas and admiring splendid street life you may feel slightly too lazy to wash your rather smelly shirt.

No problem. Shirts are sold everywhere. And designs are magnificent.

At night. No problem, al-fresco watering holes at secluded squares are abundant. As well as excellent eateries hidden in the small alleys.

think that’s enough for this post. No worry, soon there will be more.