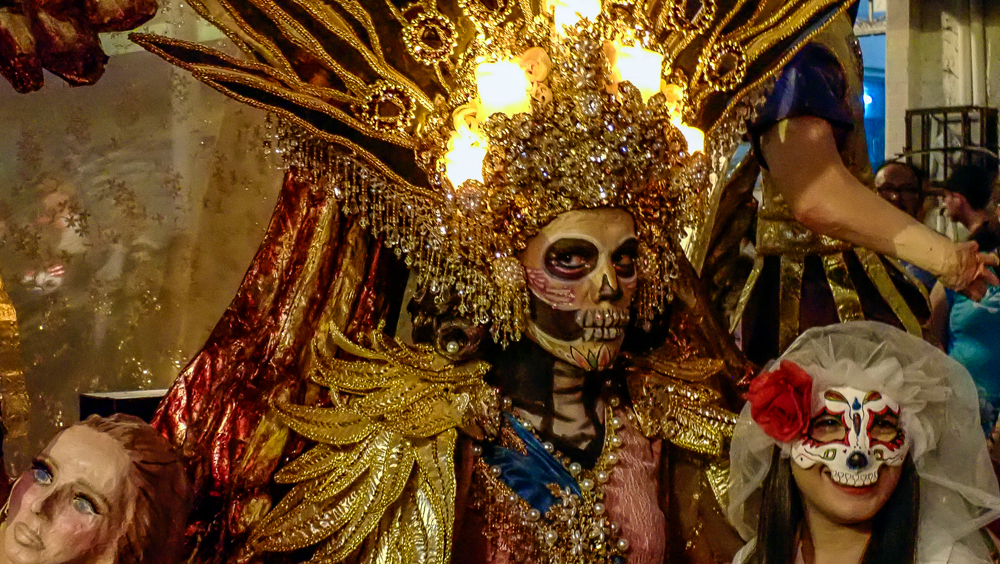 A last kitschy pic from the terrace, a last night in our rather cheap deluxe accommodation – and we’re on the way to Mazatlán’s city center.

It’s the day of 1 of Mexico’s most important celebrations rooting in the country’s ancient Aztek culture. The very day when all the guys passed away somewhen over the last 100 million years come back visiting their descendants to spend a happy day drinking, eating’n’dancing with all those who still have to follow them. Thus, it’s a day of joy and a homage to Catrina – the lovely Lady of the Death in the center of the festivities.

A time definitely not comparable to rather depressing All Saint’s Day in Europe where everybody is more than happy if finally, next morning approaches.

Some time left, so the opportunity to sneak thru Mazatlán’s centro historico. The old town – not really famous, nor big. But pretty well restored and very tidy.

Even when entering you’re clearly reminded on how to behave.

Hey guys, learn a little more Spanish. It doesn’t mean what you thought. It’s just the request to keep off the lawns. Probably politer than the all-American Keep Off.

A look at the town’s market with all kind of stuff to buy. Some more appealing than other.

Well, in the evening we’re ready for the magnificent parade of el Dia de los Muertos. Maybe a little bit wondering why these guys did not properly prepare this most important event. But who knows, we’re in Mazatlán.

So, we wait for its start. Only a few hours later we learn, that the whole thing is postponed to tomorrow evening.

Somehow, they missed to announce that properly. Or maybe, we’re just the dump tourists. Who knows. Or most probably we simply belong to the species more believing in announcements on internet than in real life.

Whatever, we had some time to observe Mexican family life.

Then next morning. Looks good. Visibly some preparations take place.

In the evening it even looks better. The famous Teatro Angela Peralta glooms in its brightest pink. Thus, the parade cannot be far away.

The hell a lot of folk populate the streets where the spectacle will pass. We even discover a brave police officer trying hard to gain authority in the pre-parade’s muddle of immense expectations.

While on the roadside Mexican beauties try to immortalize their outstanding grace, their exuberant elegance and their otherworldly delicacy in all-important selfies, …

… some of the living dead of the parade as well try to monumentalize this unique moment of transition from the real to the parade’s world to their children and children’s children.

And then, the brave police officer’s siren thunders thru Mazatlán’s old town, the sky aglows with fireworks – and the parade starts.

Then it’s over. An opportunity for a last beer and to prepare for tomorrow’s duty to decorate the graveyards all over Mexico.

And we’ll move on. Towards Mexico’s highland.

More about this soon.

To Start With - To Sinaloa, Mexico
On the Way to Mexico's Bajio