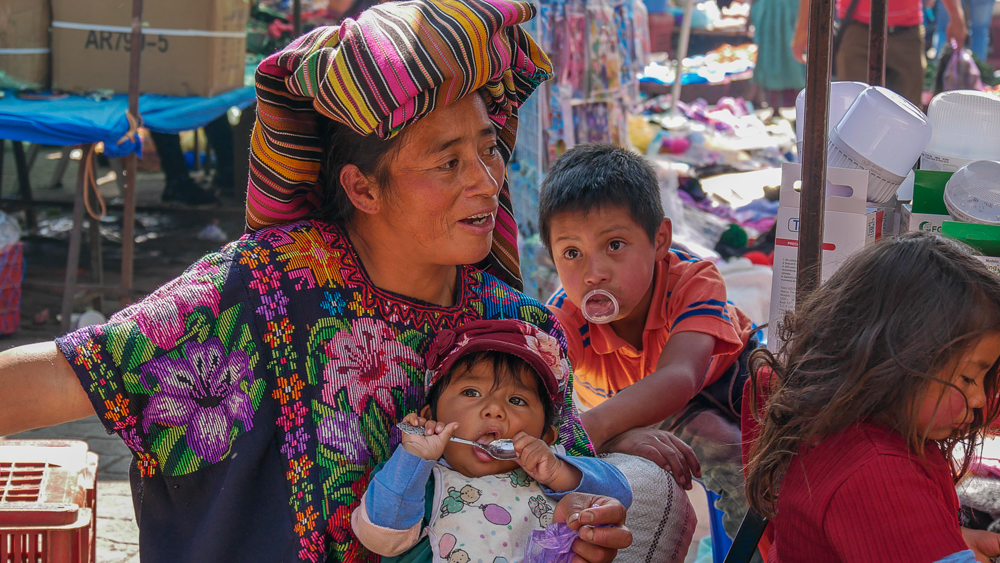 Continuing our journey thru Guatemala. From the Maya inhabited highlands around Lake Atitlan to some of Guatemala’s finest colonial towns: among them Quetzaltenango, Retalhulau and Antigua.

After the fabulous market in Chichicastenango we’re on the way back to Panajachel. Just in time to admire the sunset at Lake Atitlan.

Then it’s definitely time for a beer. Fortunately, they sell it by the liter.

The next morning we’re on our discovery tour on Lake Atitlan.

The village is strictly divided into the upper part where the locals live and the foreigner’s enclave next to the lake.

The latter mainly oriented to a kind of spiritual, esoteric, yogaic, mantraic’n’glutenfree-vegan folk. Somehow the impression remains the place is for those who didn’t have the courage to live in an Indian Ashram or simply took the wrong plane.

A short boat ride to San Juan. No idea for what reason so many tourists visit this village.

Definitely it can’t be for its extraordinary street+ especially dedicated to tourists or the incredible souvenirs they sell.

Later we learn that all these people arriving with their valuable tour guide have the unique opportunity to visit coffee and weavers’ cooperatives. Well, mainly their shops to have a chance to support local economy (and maybe the guide’s personal 1).

Whatever. Sneaking up to the local part of the village we discovered some pretty nice murals. And very few tourists admiring them.

Then a short hop to San Pedro. Said to be Lake Atitlan’s backpacky paradise.

Nevertheless, on the main tourist street we cannot find too much evidence of this. Nowhere any food stalls selling banana pancakes. Well, remains some significance indicating the presence of backpackies: a munchery offers Pad Thai. Who else would eat this stuff.

Further up to the town center with a small market.

On to Santiago Atitlan. The largest settlement on the lake. Of course, on arrival they welcome the poor tourists with all kind of irresistible offers.

Finally, we reach the pretty colorful market. Many people in their traditional outfit.

On to Santiago’s famous church.

Then we’re on our way back to Panajachel. Another 1/2 h by boat.

Remains the big question if it’s worth visiting Lake Atitlan’s villages. Well, we’re not too sure about it. What we’ve seen, they’re all over touristy in 1 part and every architect’s nightmare in the other part. Thus, not much to discover. Evidently except for hopeless souvenir hunters completely indifferent to quality and cost aspects. This maybe with the exception of Santiago Atitlan which really has some nice corners to explore.

Whatever. Would we not have visited the villages, surely we’d be convinced to have missed the best of Lake Atitlan.

We’re convinced there are many more souvenir shops to discover around Lake Atitlan. However, we decide to leave this tourist paradise for Quetzaltenango. For those among our esteemed readers who think they cannot pronounce this name – its abbreviation is Xela (Shela).

We climb up some 800m from the lake to the Panamerican Highway. Then further up to 3000m – the Alaska Pass.

A stop in San Andrés Xecul. To see the most colorful church in Central America. Unfortunately, it’s closed. Nevertheless, it’s known not to be a beauty inside.

On to the village of Salcajá. To see the oldest church of Central America.

Just by chance – it’s market day. Thus, we quickly get lost in the small alleys of this colorful traditional market.

Just a short drive and we arrive in Xela. Guatemala’s 2nd largest town. Many neoclassic colonial buildings, mostly in a pretty bombastic style. Reminds us often of some Mexican towns in the vicinity of CD Mexico.

Of course, at the central plaza the church and …

… some beautiful buildings housing some of the town’s best watering holes.

The side alleys a mix of old’n’new buildings, …

Many shops still look like the 1s grandma dreamed of some 50 years ago, ….

… while others have astonishingly tight security measures. Difficult to understand – it’s just for a couple of veggy cans and some pasta.

Whatever. The evening we spend in 1 of the traditional watering holes around the main square.

The next morning we’re on our way to Retalhuleu – just a few km to the south, but 2000m lower – in Guatemala’s hot’n’humid sugar cane production belt.

A steep descent thru a valley full of veggy gardens.

Retalhuleu – short Re-u; a proud district capital and the center of sugarcane production. Nevertheless, the town center gives you the impression of a rather poor, not too efficiently managed place with very little infrastructure.

But also, an opportunity to experience a town with many colonial buildings prior to its restoration and conversion into all kind of tourist facilities.

Also, an opportunity to admire its former importance – e.g. the railway station closed down a long time ago, or …

… the few remaining neo-gothic buildings around the main square.

And in the evening: a visit to 1 of the few street side watering holes where a beer costs less than half the price of the usual 1. And loud, Guatemalan tearjerkers are included.

We’re on the way to Antigua. Probably Guatelmala’s most famous town. And probably the exact opposite of Re-u.

From time to time you pass huge sugar factories reminding us of the early days of industrialization.

Of course, a rather boring trip.

Then for the last km the ascent to Antigua at an altitude of 1600m. Unfortunately, it’s so dusty we can’t see any of the famous volcanos.

Late afternoon we’re in Antigua. Just on time for a nocturne view of famous Arcos de Santa Catalina and …

… to find an absolutely cool restaurant near the Arco. Definitely not the cheap Taco – munchery, but worth every cent in this former trading house.

The next morning a short hike to the Cerro de la Cruz. Despite all warnings, we’re slightly astonished to discover 2 highly armed police guys protecting poor tourists visiting the place.

Whatever. Great view over the town and Fuego’s volcanic activities.

Back to presumably safer areas: a visit to the former Convento de las Capuchinas.

It’s true up to now we did not socialize with any bad girls with machetes trying to squeeze out of our pockets our last Quetzal. No, definitely not.

However, to be able to see Antigua’s main sights you experience somehow a similar situation – but institutionalized’n’legalized. Whilst poor Guaties just pay 5 Pesos to enter the Convento, these rich tourists traveling to Guatemala with the objective to spend as much money as they can have the opportunity to pay 8x that amount. Of course, for the same sight. Shame on you guys, that’s simply rude’n’indecent.

Sneaking thru the alleys we even discover the storage for all kind of accessories for their Eastern procession.

Later we stroll thru Antigua’s cobblestone streets. Colorful houses, cobblestones rather placed to work as speed bumps than as a surface for peatons’n’cars.

Passing thru the Parco Central to reach Catedral San Jose. Well, the church is not really an interesting site to visit …

… it’s rather what is hidden behind the building: the carefully restored ruins of the former cathedral destroyed by several earthquakes in the 18th century.

Back to the Plaza, towards the municipality.

Sneaking thru the traffic jam of Antigua’s colorful streets. Towards Antigua’s most famous church: La Merced.

Antigua is a town with plenty of churches destroyed by earthquakes. Mostly the facade remained more or less intact, while the interior of the building collapsed. Well, the guys never cleared the places. Thus, these ruins are spread all over the town, some of them just waiting to collapse completely. Others were converted into real tourist attractions. E.g. El Convento de la Recoleccion.

While some outer walls are still standing, inside the huge church there are just heaps of rubble – difficult to imagine its former glory.

It’s evident, there’s much more to discover in Antigua. Especially, visiting the places less infested by masses of tourists and partying Guaties. The small alleys beyond the tour group’s must-have-seen-places. The places were the Antiguis live.

That’s it about famous Antigua. A place you may love or you may hate at a 1st glance – or both at the same time, as we do.

Enough for this post. More in the next 1. Enjoy reading and feel encouraged to visit a country as colorful as Guatemala. Despite the bad reputation it may get by certain 1s.