A Quick Visit to El Salvador – On the Way to Florida 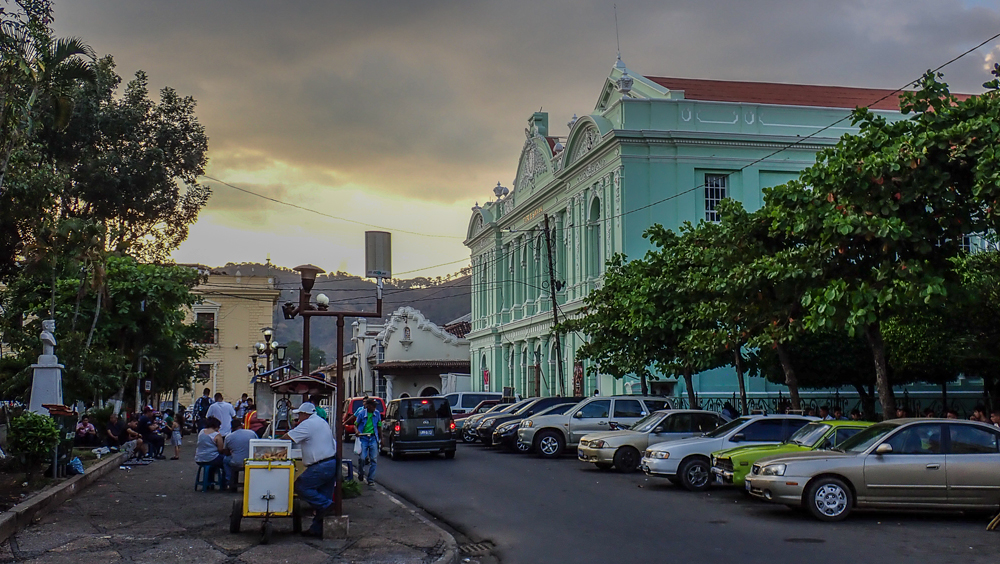 The last few days in Guatemala. A hike to Pacaya Volcano, then on to El Salvador. La Ruta de Flores, Santa Ana and to San Salvador. There Prado gets seriously sick. Needs an injection pump transplantation. And we’re already on the way to Florida – to get the spare.

We’re still in Antigua, Guatemala. And we’re in desperate need for an alternative to sightseeing in town. Easy, there’s Pacaya. A pretty active volcano about an hour’s drive from town. Terrible road to get there. Constant traffic jams thru the suburbs of Guatemala City. A stop’n’go journey thru ugly, smog producing industries. Only on the last km to Pacaya we’re back to forests – on the way up to the volcano.

Currently you cannot climb up to the crater due to volcanic activities and poisonous gases. Everybody needs a guide, even to hike up to a rim below the summit. Well, probably more a kind of watchdog to beware unruly hikers from climbing higher.

… unfortunately, it’s too hazy / smoggy to see the surrounding areas. And the volcano’s summit is in deep fog.

Arriving at the rim, at least we can imagine where the rim would be.

Nevertheless, just minutes later it clears up. Pacaya in its full glory.

Down to a lava field of last year’s eruption.

As usual in Guatemala, there’s the need for a tourist hotspot: a small hole in the lava field. Seems to have the optimal temperature to grill marshmallows. And every visitor has to do that. Probably an experience more relevant to US citizens used to munch their grandma’s old mattress than to others.

Then back on the rim, a last glimpse of Pacaya and we’re on the way back to Antigua.

The last evening in town. Well, these guys in the States organize their Superbowl. As non-US citizens no chance to understand for what reason these guys bash their head for a simple ball. Supposedly these balls shouldn’t be too expensive to provide 1 to each of the guys. Thus, they wouldn’t need to battle for the only ball available. Whatever. We concentrate on the great halftime show of Jenny’n’Shakira and an ugly guy – we forgot his name.

Outside the bar – on the road the Antiguis organize a kind of alternative to American football.

The next morning we’re on our way to the border. To El Salvador. In front of us El Fuego. This volcano spitting smoke’n’ashes every few minutes.

By 1 pm we approach the border. No stamp in the passport. It’s easy, they have their 4 countries agreement. Guatemala and El Salvador are part of it. Unfortunately, they did not extend that for poor Prado. So, we have to cancel the Guatemalan TIP. A matter of 5′ if you arrive with all necessary copies. If not 10′ as you’ll 1st visit the nearby copy shop.

Then on, over the bridge and you’re in El Salvador. Again, no immigration. And again, a TIP for Prado. You fill in a form with 100 questions about the car. Somebody types all this important information into a computer. You sign that you’ll re-export the vehicle after a certain time and that you’re more than happy to pay 912,17 US$ monthly should you delay. Whatever.

Again, we climb up to 1000m. And finally reach Juayua. A rather small’n’sleppy village in the hills. Famous for its Food Festival on weekends. As it’s Monday there’s just nothing happening.

Nevertheless, an opportunity to taste some Salvadorian beer at the central plaza. Obviously, we’re the only 1s having this need.

Next morning: the Ruta de Flores. El Salvador’s winding road thru the hills covered with wildflowers – at least during some months of the year – and dotted with colonial villages. A place we must visit.

Soon we arrive at a view point. We’re astonished how heavily secured this place is. Of course, we know that police tries to make El Salvador as safe as possible for poor innocent tourists. But such a lot of police at a viewpoint. Even if they’re occupied by some Frenchie selfie hunters.

We arrive in Apaneca. Some nicely painted houses, …

… in the center of the village we discover the village’s colonial element: the church.

What else? Some Salvadorian village life.

On to Ataco. The next village on the Ruta de Flores. Visibly the most famous 1.

In addition to the usual huge church, …

… there are quite some facilities for visitors. Mainly aimed at weekend refugees from San Salvador.

Ataco is known as the coffee capital of El Salvador. Thus, the opportunity to visit the country’s largest producer: El Carmen.

A visit of a factory where the very same machinery has worked for the last 90 years.

And where they produce some of the world’s best coffee. Should you intend to buy some of it – you’ll get the very best quality for 70 – 80 US$ a pound.

It’s a visit where you can see all steps of coffee treatment from the selection of freshly harvested coffee to the roasting of the beans some 2 – 6 months later. Depending on the quality.

Well, and that’s the final product. Ready to be exported all over the world.

Back to Juayua. Looks like we’ll have a thunderstorm in the next minutes.

Wrong forecast. Thus, a stroll thru the village. To admire their incredible fashion shops and some promises for the weekend’s food festival. Currently solidly closed.

To the monstrous main square.

A look at their church.

We move on to Santa Ana. Just some 35 km over the hills of the Ruta de Flores.

On the way we discover quite interesting vehicles – reminding us of the derby racers we built as we were kids.

At the same, time we feel that today Prado is not really in its optimal shape. The engine loses power each ascent, its famous warning light cries frequently for a doctor to check. As the Coronavirus yet has to arrive in El Salvador, it must be Prado’s engine.

A policeman stops us on our way to Santa Ana. He’s pretty friendly, wants to know where we’re coming from, where we’re going to. Then he gets stuck. What more could he ask these dumb tourists? Well, documents. We show him the sticker of the Guatemalan TIP on our windscreen. He looks at it, smiles, nods excelente and wishes us a nice trip. And we’re safe again. Easy isn’t it’?

In Santa Ana we quickly look for an accommodation, then on to Toyota. Hoping that they have a scanner to quickly identify Prado’s problem. Unfortunately, they don’t. So, they recommend us to continue to San Salvador, the country’s proud capital. We never wanted to go there – but for the sake of Prado’s health …

Thus, we drive back to Santa Ana. With a wonderful view on the check engine light at every ascent.

Santa Ana: despite the many bloggers marveling it, the town gives us a rather grim impression. Dirty, rundown, traffic chaos. And the warning of the locals not to sneak around in the poorly illuminated streets after dawn.

Late afternoon we’re strolling thru the streets towards their central plaza with its famous buildings:

the neogothic church, and …

On to the main square. Quickly done, a somehow strange and rather tense atmosphere where everybody is staring at you.

Fortunately, we find a nice watering hole’n’munchery next to it.

Time for an extremely early dinner – before it’s getting dark.

And then we’re on our way back – before the bad girls start their nightly activities in the dark streets of Santa Ana. Whatever – who knows what’s reality.

On the way numerous opportunities to admire all kind of security measures installed by the innocent inhabitants.

The next morning: the good boys are back in the road, the bad girls gone.

An opportunity to explore a little bit more of Santa Ana. A look at the market. Somehow strange, it spreads over many roads in the CBD.

There’s also a big market hall. A rather weird, badly maintained construction of corrugated sheets with all sales booths enclosed in a kind of cages. Probably to avoid bad girls to be too active.

On to the central square. To visit Santa Anna’s astonishing theater.

Then we drive on to San Salvador.

Quickly get a sleepery in 1 of these secure areas and …

We’re told that they definitely need a few days to diagnose Prado’s problems and we’ll be informed once they know what the hell might be the problem.

Thus, we’ll definitely have some time to make our laundry. Especially, as El Salvador’s proud capital is really not too renowned for too many attractions that may be in the interest of tourists.

Maybe except the World Trade Center just next to our accommodation. A kind of island in ordinary Salvadorian life. A cluster of higher rising buildings – all pretty modern, sanitized, super secured and the place of a food market.

Well, not really local food, but a kind of Uncle Don’s fast food. Except the beers – they’re not at all US size or prize.

Thus, a place to spend some time, to support the economy of the local watering holes and …

After 4 days we finally come to know Prado’s problem. An issue we knew about for more than a year: now the diesel pump definitely has to be replaced. Added to this diagnostic we find Toyota’s proposal for the treatment: 6800 US$ for the pump. And it’s not available in the country. And they don’t know how long it takes to organize it.

Wow – what a story. Now we have to search for the reality of this issue. Have a look where this pump may be available and at what cost: Euro 4×4 Parts in France, Amayama or PartSouq in Dubai. Quickly we find that the normal cost for the injection pump is about 1/3 of Toyota’s proposal.

Then we’re busy calculating what options we have. Repair it, find another car to continue, or rent a car in each country we’ll visit. After 2 liters of beer we know we’ll not continue by bicycle. We decide to repair Prado, should we be able to organize the pump and provided the motor is in good health. Thus, we have to speak to Toyota.

Next morning with Toyota. They have no problem if we organize the spare ourselves. They even check the number of the damaged pump again to make sure we’ll order the correct 1. And we’ll only have to pay their labor cost. Ok. Then they show us all other things they found with Prado. Of course, we already expect the worst. Nevertheless, It’s just stuff we already know, stuff we have to decide if we want to repair it or just observe – as we already did for a pretty long time. Finally, they promise us to make an in-depth analysis of the engine – and on this base we can finally decide on how to continue. Complicated – isn’t it?

Next. To DHL. To find out how to import a spare part into El Salvador. Quickly we learn that this is a pretty lengthy and nerve consuming affair. Probably rather an affair for 1 of these exorbitantly expensive customs agents. Especially with our limited knowledge of local administration customary and our not-yet-absolutely-perfect Spanish. Calculating again: import taxes, VAT, special attentions to improve services, customs agent, etc. Well, probably it’s cheaper to fly to Miami, drink a coffee with Uncle Don and fly back with the spare. Why not. For a change.

Quickly we organize everything: order the spare part, decide to spend a few days in Uncle Don’s Own Country until the part arrives, book tickets for the cheapest flights available and rent a car in Fort Lauderdale.

And the next day we’re proud passengers of absolute no-frills Spirit airlines. On the way to Florida.

Wanna know how it goes on? Easy, but in the next post.