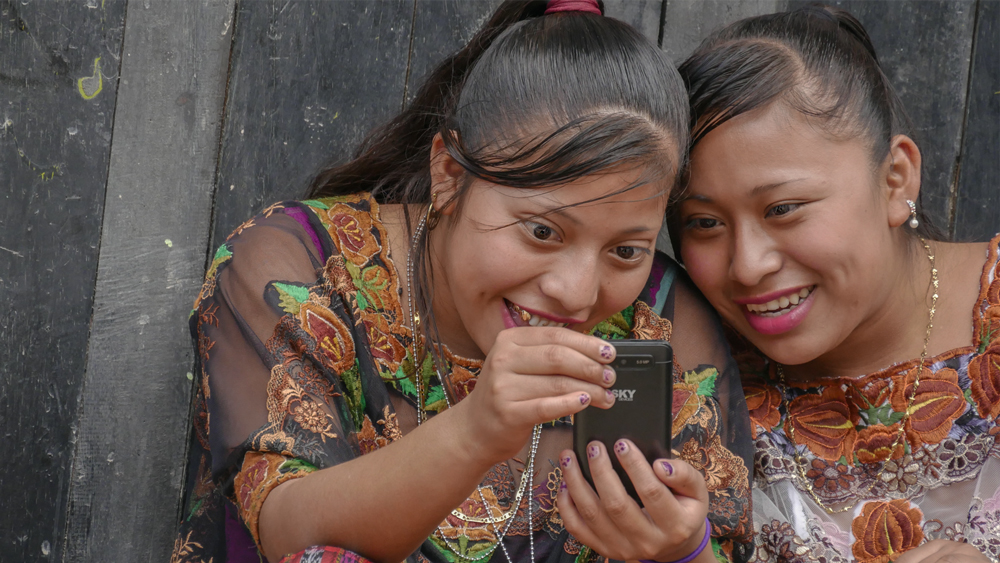 From flat Peten District to Guatemala’s mountains. A region largely inhabited by the Mayas. A visit to Semuk Champey along the mountains to Nebaj and down to Lake Atitlan, Finally a visit to the incredible market of Chichicastenango.

A last beer in Flores.

The next morning, we desperately try to escape continuous rain and humidity.

The 1st part thru the rather flat Peten District, then a small ferry and …

… later up to 1500m in the Alta Verapaz District. A pretty traditional area.

Coban, the District Capital of Alta Verapaz. Today still Guatemala’s center of coffee production. Not really much to see, except a few colonial buildings in the center, a pretty strange modern construction in front of the cathedral and …

The next morning we’re on our way to Lanquin. To visit Semuk Champey. The place you have to admire in bright sunlight. But still, there’s rainy weather.

On the way some more coffee plantations.

A drive high up into foggy areas.

The last 10km a steep descent on a gravel road.

The road is pretty ok, just muddy from continuous rain.

And visibly not easy to be driven by overloaded tuk tuks.

Lanquin: a village with a kind of end-of-the-world feeling. Pretty small, a central plaza to exchange the latest news – despite the fact that by now internet has arrived in town.

The small market. Somehow you have the impression the locals are a little tired of all these tourists passing thru without buying anything.

Despite its small size – the ultimate place to go shopping for the latest fashion.

On to the church. A very atmospheric place. The building has obviously never been renovated. Insight a lot of candles. Great place to visit.

The whole night it rains. Constantly. We’re developing plans to drive back to Coban without having seen famous Semuk Champec. The famous 300 m long natural bridge over River Cahabón with a series of turquois basins on top. At least if there’s sun.

Nevertheless, the next morning weather has slightly improved. Thus, we’re immediately on the way before rain starts again.

As the road is extremely muddy and slippery we decide to take a Collectivo. A chance to get our ultimate massage provided by the road’s potholes and the car’s nonexistent shock absorbers.

A little over 1/2 h and we arrive. We’re astonished how few tourists are currently visiting. Probably it’s just a consequence of the bad weather.

We pay an entrance fee. Then we’re on the way to the famous Mirador. A steep’n’muddy path to the top of a hill, partly with wooden stairs.

30′ and you’re up. Just ready to admire the fabulous view a few 100 m below. Despite the weather.

A steep’n’slippery trail down and you’re at the upper basin. The place where the river disappears in the underground and the bridge begins …

Then we’re already at the end of all this beauty. Just 300m from the starting point.

The next morning: We’re ready to move on. Fortunately, the weather looks pretty good.

Nevertheless, we’re still back in the mud, driving up to the highway and on to Coban.

The next day on to Nebaj. Just 125 km. But on a road thru the mountains, thus a few vertical km to add – on pretty steep slopes. Sometimes we have the impression an ascend with less than 20% is forbidden in Guatemala.

In San Cristobal Verapaz a very short stop. Not because it’s ugly or boring, just there’s no legal parking for Prado. And the town is police infested.

Shortly later gravel starts. Just for some 30 km. The road high above a valley, later a steep descent.

Back to the asphalt. Some stunning mountain scenery – and many veggy gardens.

Late afternoon we arrive in Nebaj. We expected a small village in the mountains. Ways off – it’s a midsize town in a valley.

Sneaking thru the CBD.

A visit to the central square. Visibly the town is nearly 100% populated by indigenous Maya. The Ixil with their very specific language and clothing.

And it’s 1 of the areas were the military regime in the 70ies and 80ies committed some of the most brutal crimes during their operations to contribute to Cold War and the well-being of the United Fruit Company.

A stroll thru the market, …

… finally, a couple of beers at Vallhalla’s – a somehow weird bar. At least in a place like Nebaj.

But exactly the right place for us as well as for many Nebajies.

We’re on the way to Panajachel at Lake Atitlan. It’s just a little over 130km.

… a last glimpse of Nebaj and …

… the road continues to wind up’n’down thru the mountains. Probably you’re convinced it will never ever take longer than 1 – 2 h to drive 130 km. You missed it by miles. You won’t exceed 40 km/h if you’re not the driver of 1 of these Chicken Buses. As business oriented as they are they easily drive twice as fast – of course, regardless of any consequences for humans, goats and chicken along the road.

A stop in Santa Cruz Del Quiché. A pretty lively place around the central square and …

After some 100 km we reach the Pan American Highway again. This famous road we left nearly 2 months ago in Tuxtla Guiterez, Mexico. When we drove up to San Cristobal.

A few km later we leave the Pan American again. We’re on the steep descent to Panajachel at Lake Atitlan.

On the way we pass the market town of Solola. No way to park Prado somewhere for shopping. No, we just get stuck in the traffic, a huge jam thru the whole town. For us a lot of time to admire life passing by. From a little far, from the car.

Finally, we’re back on our way. The first glimpse of famous Lake Atitlan and its surrounding volcanoes. Unfortunately, it’s a little hazy. Thus, not too much to see.

We just reach Panajachel on time to admire a kind of sunset.

The next morning the view is pretty different. Clear weather is back again.

It’s also the opportunity to explore the hidden secrets of Panajachel.

And there are also some important fashion shops. Some just selling the latest bikinis created by China’s famous couturiers, while others rather aim to the pretty liberal urban class of locals still deep-rooted in traditional Maya costumes …

Well, we’re not really in Panajachel to explore all details of this place. It’s Sunday. The day when Central America’s most famous market takes place in nearby Chichicastenango.

It all starts in a sports hall. Where kids normally play basketball. Today all kind of veggies are sold.

Nevertheless, veggies are not the main motivation to visit the market. No, of course it’s all about fashion – Maya fashion on Chichicastenango’s central square. That’s where it gets pretty busy.

There are literally 100s of shops where you can buy this colorful clothing. Nothing being too beautiful to be sold.

Despite all these incredible offers the market is also the ultimate place for socializing and for a small talk with the neighbor in the middle of the crowd, or …

… just to look around.

There’s definitely more to discover than this fascinating market. On a side of the central square there’s the famous Iglesia of Santo Tomas – a kind of mystic place. And an experience definitely not to be missed while in Chichicastenango.

A fusion of ancient Maya and the predominant Christian rituals. Mainly visible on the stairs to the main entrance and …

… in front of the church door.

Entering the church. Not much decoration but the candles on the floor. Shrines on the side. They’re from villages often far off. Placed for a certain time in the church.

Later 1 of these shrines just has to say goodbye to its temporary host. And getting back to the village. A long’n’complicated ceremony to get it back on the road.

Finally, the shrine is on its way home.

Back to real life. 1 side of Chichicastenango’s central square is decorated with murals of Mayan history. Some of them showing the brutal interventions of armed forces in this area during the 70ties and 80ties of last century.

A kind of collateral damage of the Cold War and the economic interest of the late United Fruit Company.

After all that – time for a munchery? You’ll have many opportunities.

But 1st the stuff has to be prepared. Mainly the job of kids and grandmas

… and should the business not work as planned, there’s an alternative.

Finally, should you feel some need for improving your beauty? Even for that there’s a solution.

Enough of markets. Even if they are as fascinating as Chichicastenango.

Time to drive back to Panajachel.

Hey, that’s the end of the current post. More adventures to come soon.