Nicaragua’s Backroads – At Least Some of Them 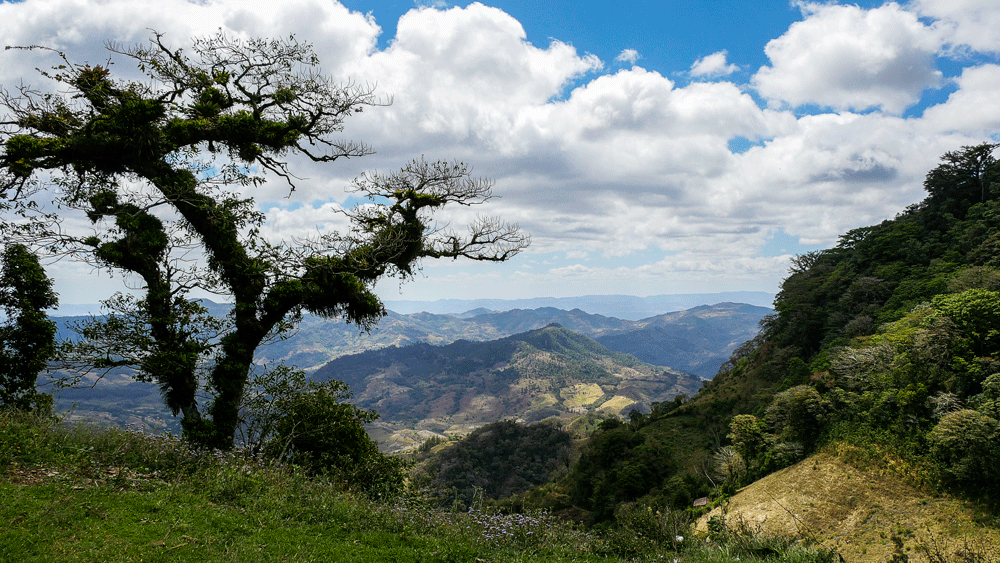 A journey thru Nicaragua’s West. The coffee growing highlands around Somoto and Selva Negra. Some remnants of the war against dictator Somoza. Then to Leon: the great colonial town in the lowlands.

Initially, we’d planned to visit famous Somoto Cañon. But by now, we’ve seen that there’s next to no water in the river. Thus, why the hell should we go there even if the local guides are extremely enthusiastic about visiting right now this river without water.

The alternative: The coffee growing area in Dipilto towards the border with Honduras some 50 km away.

Again, we climb up to 1400 m. The landscape changes drastically. Gets green, everywhere coffee plantations shaded by flowering trees.

On the way back, a stop in the small town of Ocotal. We drive up to a viewpoint …

… with a museum of the heroic achievements of the Sandinistas. Unfortunately, just a few pictures. But well protected by a very friendly policeman.

A look at Ocotal’s main square …

… and then, we’re on our way back to Somoto.

A stroll thru the town. Not extremely interesting, …

… the usual church at the main square, but …

… still the town is trying hard to maintain its revolutionary spirit.

Especially the FSNL – building. The house of the Sandinista National Liberation Front.

The next morning, we drive on. Thru Nicaragua’s highland. On the back roads towards Matagalpa.

A 1st stop in the heroic village of Condega. To visit some more of this revolutionary stuff: the Parque el Avion.

In 1979 Condega’s Sandinistas downed 1 of Somoza’s planes. As this is still considered a heroic act of anti-imperialistic liberation of FSNL, the inhabitants patched up this plane to expose it on a hill to their children’n’children’s children.

On thru the hills, a small’n’steep road.

Passing thru rather remote villages …

On along Lago Apanàs. A huge reservoir, however not too fascinating.

Then climbing again to 1500m. Towards Nicaragua’s Selva Negra.

Long time ago the place where German migrants settled to grow coffee. Probably the trees in this place somehow reminded them to the Black Forest in southern Germany.

Finally, we arrive at the Selva Negra Mountain Lodge. A place offering everything from camping to a luxury house overlooking the mountains. All in the middle of a coffee plantation. And all heavily secured by a tank of Somoza’s army destroyed by the FSLN.

Of course, there are a number of trails thru the forest. Rarely used by anybody, but definitely worth the effort to climb the hill behind the plantation.

On the top a view point promising a terrific view – probably before the trees have grown up.

Later the steep way down – back to the starting point.

Tired of sneaking thru the jungle. Need a change. So, we’re on the way to León. Nicaragua’s most important town in the west.

A steep descent from Selva Negra to Matagalpa. Some 800 m down over a few km.

Matagalpa: a town with quite a number of heroes of the recent history – many of them exposed around the central square.

But also, a huge cathedral and some quite traditional life.

Then on to León. In Nicaragua’s hot lowland, along a chain of volcanoes – some still pretty active.

León: another opportunity to experience Nicaragua’s revolutionary history. Of course, the inhabitants are incredibly proud of being the very 1st town liberated from Jimmy Carter’s best friend and Taliban Anastasio Somoza.

The best place to experience this is the Museo de La Revolucion. It’s on the main square. Once a pretty opulent mansion, during the war in the 70ties Somoza converted it into a prison’n’torture chamber. Then it became a museum with bullet holes in the walls still visible. Don’t expect too many great artifacts. It’s more about the place, and if you speak some Spanish, about the guides – former fighters against Somoza who still remember every detail of this repressive regime and their US counterpart.

Enough of this. Let’s go to the heritage of the good old Spaniards. Some churches left. By now, some really looking old’n’used, others remind more of Mexican extravaganza, …

… and finally the 1 which was never intended to be in León, Nicaragua but in Lima, Peru: the Basílica de la Asunción de la Bienaventurada Virgen María. Yeah, it was just a small misunderstanding of the Spaniards’ logistics department.

You can even climb its roof. To admire León’s skyline.

Enough of this old Spanish stuff? Ok. León also has a market to explore. Well, even a pretty rustic market. Maybe not everybody’s taste, but definitely worth a visit should you wanna know another aspect of Nicaraguan life. And know more about the meat cooked to perfection at your favorite gourmet temple.

Then finally, there are all these atmospheric alleys to stroll thru. Quite some houses crying for a minimum of maintenance.

And the old town – more a street with few remaining houses.

And after all this? Time for some beers.

Go to Top
We use cookies to ensure that we give you the best experience on our website. If you continue to use this site we will assume that you are happy with it.OkPrivacy policy