To Start With – To Sinaloa, Mexico 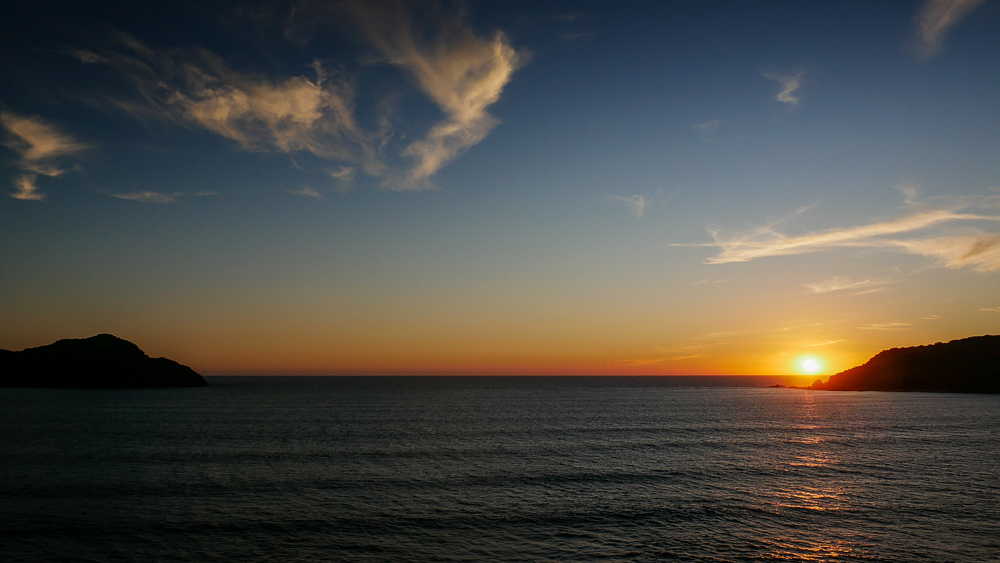 21st October – finally it’s time to say goodbye to Lucerne. To start the next leg of our trip from Maseru to Ushuaia.

Well, today it’s a pretty short trip. Just 60 km to the airport. Nearby we plan to spend the night to be ready for next day’s early morning flight.

60km with Swizzy Railways, a company supposed to be pretty efficient, reliable and well known for its exorbitant prizes.

And due to a new strategic approach, they introduced a few weeks ago, the company is probably even better than ever before. It the all-important optimization of the train’s punctuality. Of course, punctuality in a global sense, not this fussy examination of each’n’every train. And this with an extremely simple approach. All delayed trains simply don’t drive to their final destination. They stop somewhere on the way and kick everyone out. So, they ensure their punctuality on the subsequent course. This avoids cumulation of delays and thus it’s great for the statistics. Well, maybe a slightly different perspective for the poor passengers who have to leave the delayed train somewhere in the middle of nowhere and wait for a connection – but who cares. It’s all about statistics.

Well, in Lucerne our train is a little late. Consequently, it never arrives as planed in Zurich. Everybody is kicked out some 25 km away and has the opportunity to wait for the next train. In Zurich we change for the airport train. In the meantime, we’re pretty late, but there are just a few km left. Again, the train is a little late. Just some 5′. Consequently, again we’re kicked out just 1 station before arriving at the airport. Great. Some time later there’s finally the train arriving at the airport. Well, it’s ok. We’re not in the harsh world of salary slavery, thus have time to enjoy Swiss Railway’s endless trips. Even with all the heavy baggage we are carrying. 2,5h for 60 km. Next time we’ll cycle.

Nevertheless, the company’s statistic on punctuality will look great. Supposedly some 98,79% of the trains arrive on time (compared to 48,649% previously).

Maybe time for another statistic: the percentage of passengers arriving at their destination as promised initially. Probably a slightly different picture: 38.43% arrive with the intended train. 15,03% 1h late after 1 change of train. 12,26% 2,5h later after 2 changes, 7,78% 4h late due to 3 changes, 7,98% die on the way of a heart attack, 8,31% commit suicide and the remaining 1s are not part of the statistics because they started walking to their final destination. For those fluent in Swizzy German here some additional information.

Dear CEO of Swizzy Railways are you really aware that some 16% of your esteemed customers may die every day by using your trains? Just consider how quickly you reduce your consumers. We’re definitely afraid in a few weeks there will be nobody left to transport – and nobody to read your great statistics about punctuality of your trains. Is that really your objective?

Whatever, finally we’re in our nondescript airport hotel, sip some lousy beers – ready for tomorrow’s adventure.

Early morning a short hop to Frankfort, then on to Cancun. With Condor. Happily, the guys still fly despite the insolvency of its parent company Thomas Cook. This thanx to the German tax payers’ generosity providing some emergency help to the airline. Maybe it’s our last flight with Condor. So, let’s enjoy the 11h to Cancun in 1 of their rather old planes.

In Cancun another night in another airport hotel. Then on via Ciudad de Mexico to Baja’s La Paz. Just another day in planes and airports.

Fernando, the nice guy of La Paz Mini Storage picks us up at the airport and a few minutes later we’re starting Prado’s deep sleeping engine. Well, it takes a while – but finally a huge cloud of oily black smoke announces the successful reanimation of the car.

Soon later we’re on our way to La Paz’ beautiful Malecon with all its al-fresco watering holes.

Then a pretty busy day. We drive some 25km to Pichilingue – the ferry port of La Paz. And the place to obtain your temporary import permit. As Baja California is a Free Zone no need to have this all-important document before passing thru Pichilingue’s customs to leave for the mainland. A visit to Banjercito, the place to experience Mexican bureaucracy at work. A nice guy working pretty seriously starts the process – just to finish the whole issue within 10′. And Prado gets its permit for 6 months in Mexico. Easy, friendly. Definitely easier if you speak a little Spanish – no idea if the officer knows a single word of English.

On to the office of Baja Ferry. Just to learn that the nice boat to Mazatlan is replaced by an old heap of scrap until urgent repairs have finished. Thus, a floating coffin not suitable to transport any human beings. So, we opt for the alternative destination – Los Mochis. Well, this means we have to drive southwards along Sinaloa’s coast to reach Mazatlan. Who cares.

We try to buy the ticket. Only possible once you have confirmed weight’n’mesure of your vehicle. Sounds easy, but isn’t as the balance is inside the customs area. Thus, we have to explain the customs officer that we need to enter his sacred territory. But not for leaving Baja – only to weigh Prado.

Finally, we pass customs – even with an extremely short inspection – get done the bureaucratic requirements and are ready to buy our tickets. Getting us and Prado out of the customs area takes a little more time due to a military check point on the way out.

Probably buying the tickets in La Paz’ city office would be easier. Or on internet – provided the site runs properly.

Next. An oil change for Prado, fill up the transmission fluid level and get it ready for new adventures. Thanx to iOverlander we quickly find a mechanic and have everything well done: Mecanica Express.

Time for Bismarkcito on the Malecon – the place to enjoy all kind of oysters.

A few days left in La Paz. Time to enjoy the city’s cultural offers. Well, some of them more to our taste than others.

On 28th we finally head for the ferry to Los Mochis. Quickly we pass La Paz’ customs control. Have the car papers checked, the car inspected – at least a little bit and then it seems we’re ready for Mexico’s mainland.

To find a place for Prado on the ferry seems to be slightly challenging for the staff. Not because of Prado’s exaggerating claims, it’s more a question of coordination between the different guys. Whatever, we find a quiet corner behind a truck loaded with smelly fish.

The ferry: not really to compare to those cruising in the northern part of Europe. Rather seems to be a former truck ferry used by Stena Lines many years ago. Still their pictures everywhere. Not much space to sit outside and enjoy the sea passing by. The poor passenger facilities are concentrated to some small prisonlike saloons, where everybody has to watch movies of brutal absurdity about the gringo’s way to save Latin America. Maybe as a preparation to narco infested Sinaloa.

Despite all, a nice sunset over the Sea of Cortez, and …

… 7 h later we arrive in Topolobampo. The port of Los Mochis in Sinaloa.

Topolobampo: nothing to speak about. Rundown, dead, a lousy hotel and at 10pm even not a single place for a beer.

The next morning nothing can stop us from moving on immediately. We head on to Mazatlan. Some 450km to the south on the highway. Thru Sinaloa’s agricultural land. Landscape just flat, not of too great interest.

On the way we pass Sinaloa’s proud capital of Culiacan. Some 2 weeks ago the town got some international attention due to fierce fights between the usual suspects in Mexico.

By now, on the city’s bypass there’s even not a checkpoint left. It looks like business as usual – maybe as well as 2 weeks ago.

In the evening we arrive in Mazatlan. For a change in the famous Zona Dorada. Once a huge tourist hotspot, having declined for many years. Now with improved security slowly recovering from its worst phase. An opportunity to get reasonably prized beachfront accommodation. Maybe not exactly what we’re normally looking for, but ok for a 1-2-day change …

… and anyway – breakfast is excellent.

Well, that’s it for the moment. More stuff in a few days.