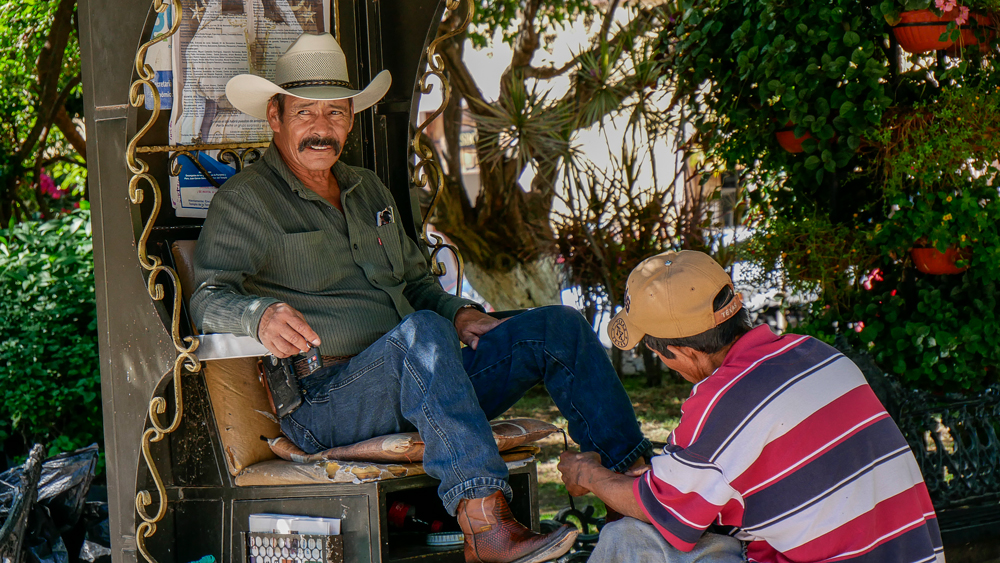 A drive thru Mexico’s highlands. The visit to the fascinating colonial towns of San Miguel de Allende and Queretaro – magic places to admire.

Time to move on. A last glimpse of famous Guanajuato and we’re on the way to San Miguel. Some 100km away.

A stop in the small town of Dolores Hidalgo.

A highly patriotic place in Mexico: some 200 years ago a certain Miguel Hidalgo y Costilla cried at this place for independency – and some 10 years later the Spanish rulers were sent home.

Today Miguel still seems to be astonished about the influence he had at that time.

Of course, the locals have more than their hero. Especially ice cream – in 500 different flavors: from odd Philadephia Cheese to Chiles en Nogada (including meat), cervesa or even Tequila ice cream.

And everybody admires it.

San Miguel, definitely a slightly unusual town by Mexican standards. Probably it’s the town with the best-preserved old town in the country. And it’s an UNESCO World Heritage Site.

But it’s also a town with an important US’n’Canadian population. Mainly sexy senior citizens escaping their countries’ harsh weather. Thus, it’s also a town with huge disparities. In many places it’s difficult not to get the impression of rich foreign consumers versus poor Mexican servants.

A situation not observed to that degree at other places.

And searching a little deeper in local press releases you’ll discover some not neglectable security issues over the last years.

Whatever. A town with very different faces. Some consider it even a kind of Disney Land. Maybe exaggerated. Nevertheless, some tendencies might exist.

Visibly, Mexicans consider San Miguel the ultimate and most romantic place on earth to marry. On a Saturday afternoon wedding parties queue up in front of the basilica for the ceremony.

… despite all the muddle in this place.

Of course, there are other romantic activities you may organize – provided you’re in the right mood.

At night. Of course, there’s the unique opportunity for a couple of beers at the Plaza, or …

… simply for observing the ghosts moving by.

Back to daylight. Obviously, the time to discover San Miguel’s colorful cobblestone alleys, …

… to buy some stuff to incredibly brighten you up, …

… or to listen to the mariachis on the Plaza (until you suffer of a serious headache).

Or just wait for dawn and another sundowner at the Plaza.

A last, slightly unruly night in San Miguel. At 5am it starts. Just difficult to say what it is. An early morning firework in 1 of the suburbs – or a serious shooting to defend the vitally important honor of a guy’s small sister going bad?

Whatever. As there’s nothing mentioned in the media in the next days we think it wasn’t the big brother’s small sister.

On to Queretaro some 70 km to the south. The next great colonial town of the Bajio and just another 1 of Mexico’s numerous UNESCO World Heritages . And much less Americanized than San Miguel.

… and places with palatial buildings and narrow back streets.

Admiring all exuberant baroque churches and …

… the town’s wel-known aqueduct – even if was not built by the good old Romans.

Finally, we even discover the place where you can stand side by side with the local heroes’n’celebrities – at least for the all-important pic for your grandma’s gallery.

Whatever. Time for a watering hole at the Plaza de la Independencia.

Well, Tula is famous for its archeological site: The gigantic Atlantean Statues of the Aztecs.

The town itself: a place with some potential for improvement. Or, Mexico as it is in many places.

Nevertheless, it’s the place we found a safe place for Prado for a few days. In the meantime, we plan to travel to CD Mexico as backpackies.

Well, that’s it for now. Next post will be about 1 of the largest city of the world – Mexico City. Soon, promised.

On the Way to Mexico's Bajio
Ciudad de Mexico