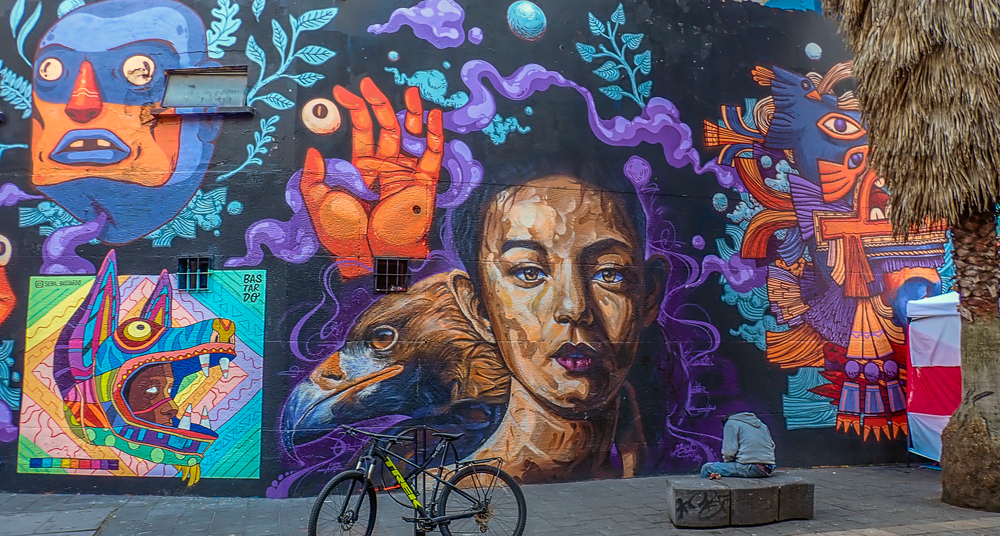 Prado is parked in pensione in Tula. We convert into backpackers, drive to Mexico City to explore the town. 3 1/2 days sightseeing. Then back to Tula.

To start with a word of warning: even don’t think about going to Mexico City if you …

… and if you think you cannot live a few days in an intense cloud of smog – as most inhabitants of Mexico City do for 364 days of the year.

Should these 2 terrible constraints not apply to you – just visit’n’enjoy.

Back to overlander’s reality.

Considering the 8.6 mio. inhabitants, the terrific traffic and the huge extent of Mexico’s capital we decide to take the bus from nearby Tula.

Thus, for a few days we convert into backpackies.

It’s easy. Just a little less than 2h to Mexico’s Northern Bus Terminal, then 1/2h by metro and you’re right in the center.

Of course, this immediately leads to the question of transport within such a huge town.

Well, nothing compares to Mexico’s metro. Taxis, Uber or their fiercely promoted Turi Buses – they all get stuck in the city’s constant traffic jams. Walking huge distances may be another option.

Eventually remains a chopper as an alternative. But where should they land if the roads are blocked with all these cars.

The system of the metro is not too difficult to understand. Go to the taquilla (= ticket counter). Best is to buy 10 tickets as an investment for future – they cost just 5 Pesos (0.25 cents) each. Have a city map with the metro stations – find out on the metro plan which line to take, where to get out and where to change trains. Get in quickly – the doors open only for 1-2′ – and enjoy the drive to your destination. Easy – isn’t it? Sounds more complicated than it is in reality.

Oh, one last thing: don’t drive during rush hours when all salary slaves are on their way.

So far, some information for poor travellers’ survival. Now to the real thing.

Obviously, the very 1st place to visit is the Zocalo – La Plaza de Independencia. The huge square with the National Palace on 1 side and the biggest cathedral of Latin America next to it. Thus, the very center of Mexico.

Immediately you realize strange sounds and the smell of burning leaves. No worries. This is just the corner with numerous “Aztec dancers” performing for the odd visitors of the Zocalo.

At sunset, the ultimate event is the ceremony of lowering the huge flag in the middle of the square. Visibly they forgot to raise it in the morning, so the evening commemoration cannot take place. What a pity.

Therefore, we have to concentrate on the cathedral in all its splendor in the light of the sunset.

The interior – rather dark and gloomy.

On the other side of the Plaza a band of the army – maybe trying to overcome the failed flag lowering ceremony. Who knows.

Obviously the Zocalo did not always look like this. Before the Spanies conquered the Aztecs some 500 years ago the square was the place of the Templo Mayor – the big temple of the Aztec capital of Tenochtitlàn.

Pretty convenient for the Spanies who used its stones to build the cathedral and all these buildings around Zocalo.

Nevertheless, a few decades ago the remains of Templo Mayor were restored and a museum added.

Of course, including the famous Skull Rack – somehow the symbol for bloodlust and thirst for power of the Aztec rulers.

A glimpse at the museum – a few exhibits which were not integrated into the Spanish constructions.

After that, tired of these old stones? Or do you just need to bump into somebody when sneaking thru Mexico? No problem.

That’s what is Avenida Francisco y Madero for – a pedestrian area and the main shopping street in the center.

For a few guys the avenue is the ultimate chance to remain in the mood of the great Mexican Revolution, …

… for others it’s simply the enigmatical opportunity for snacking in their all preferred eatery.

After a km or so, should you be exhausted from bumping into other people – visit the Torre Latinoamericana. Not because it’s a beautiful skyscraper. But simply because this construction, finished in 1956, for many years remained the tallest building in Latin America. And because there’s an elevator bringing you up to a viewing platform high above Mexico’s city center.

Getting up is easy. You pay an inexcusable high entrance fee (at least for Mexico), take the elevator to the 39th floor, walk up to the 44th, then you’re on the platform and the view is yours.

Quite an opportunity for observing dense smog over the city. Today it’s extremely low.

A little further the world-famous Palacio de Bellas Artes for the culture addicted, …

… and the splendid Palacio Postal. The very place to buy ordinary, odd stamps.

No doubt, after a while all this splendor, this extravagance and this pomp’n’glitter of certain areas just is getting too much.

So, let’s sneak on – to the ordinary Mexican areas.

Definitely not an easy task. After a few meters thru crumbling, graffiti grubbed houses you arrive in China Town. Well, maybe it’s ordinary Mexican life as well. Even if everything looks very Chinese, the inhabitants all seem to be of Mexican origin.

Nearby 1 of the most famous markets in town: Mercado San Juan. An incredible selection of delicacies. A gourmet’s delight. At least for some visitors.

On thru some back alleys …

… to a narrow street full of murals. Not the 1s Mexico City is famous for. Those of Diego Rivera. For those you have to queue up for hours. So, we limit ourselves to some more recent 1s. Maybe less artistic than those made by Diego – maybe not.

If in Mexico City, there’s 1 must-have-seen place not to be missed – even for us not too addicted to museums: The Museo Nacional de Antropologia. The place the Mexies expose all masterpieces they found in the country.

Probably this centralized approach better helps the country to preserve its heritage.

Well, the museum is definitely huge. With 1000s of exhibits. You may stroll thru the different halls in half a day – or spend a week or 2 to explore most of it.

We’re more the guys of strolling thru in half a day.

Then we move on to new adventures. Thru 1 of the city’s parks. As it’s a weekend it’s more a kind of fairground.

We plan to visit the famous Castillo de Chapultepec. We’re getting slightly demotivated once we discover all the guys queuing up to enter.

A stroll thru Mexico’s CBD. Some skyscrapers, some luxury sleeperies, some banks – not very lively.

It’s Sunday. The opportunity to stroll thru Mexico’s old town and have a glimpse of its Sunday market. An area rarely visited by odd tourists.

Plaza Santo Domingo with all the small stalls where you get your love letter written
by a professional – or your complaint to the President.

Plus, there’s a sumptuous church.

… to the Sunday Market.

The ultimate place to learn everything about cheap Chinese products for the world.

And finally, to the Mercado Presidente Abelardo Rodriguez. Not because the Market is so fascinating. No, it’s just about the murals at the entrances of the building. They’re painted by students of famous Diego Rivera. If we can’t sort out seeing the teacher’s murals, we have to limit to those.

Well, that’s it. 3 days of intense sightseeing in Mexico City. Of course, you might continue for another 37 days without having seen all the town has to offer.

Whatever, 3 days in Mexico’s smog is enough for us. The air saturated with smog to a degree you even won’t feel hungry in the evening. You’ll just need a couple of beers to wash it down.

We’re on our way back to Tula. With the same bus company having driven us to Mexico a few days ago.

All to escape our miserable backpackie destiny and to reconvert into overlanders.

Hey guys, that’s it for this post. Soon there will be more. And not limited to 1 single city. Promised.