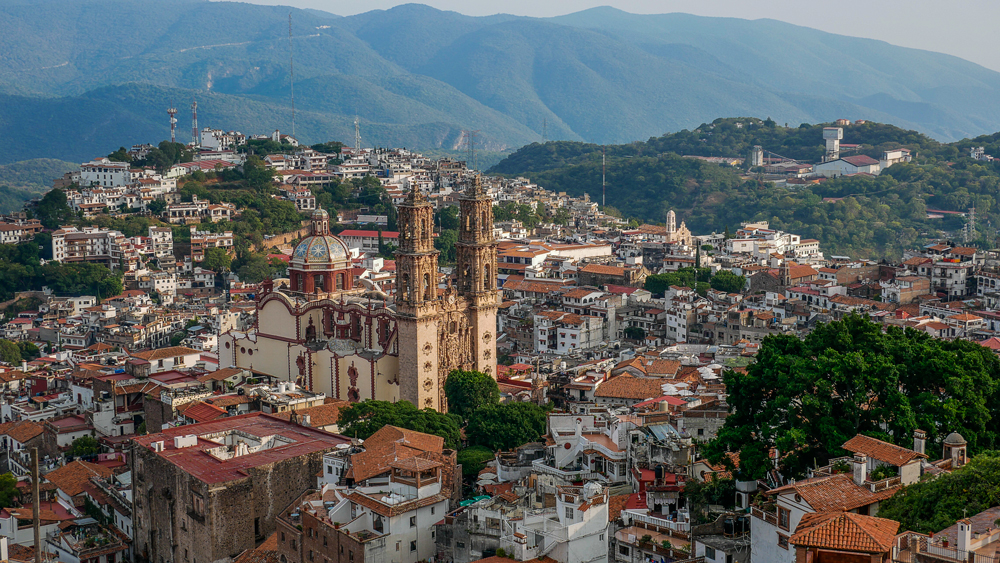 Imagine you climb some of the tallest prehistoric pyramids in Mexico. To discover how big the Avenue of the Dead of this town was. Then you visit 2 of the most magical villages (towns) in the country: Taxco and Puebla.

We’re back in Tula. Find Prado safe’n’sound in its pension (a safe parking).

We climb the pyramid. And here they are – the grim Toltek warriors. Having protected the site for nearly 1000 years.

It’s true, the site is not really big. Nevertheless, we’re slightly astonished on how few people visit it.

Maybe we’re simply too early in the morning.

The next morning, we leave for Teotihuacan. Just 100 km to the east.

The archaeological site of Teotihuacan: most important 1 in Mexico. Each’n’every tourist coming to Mexico City also visits this site on a day tour. And there are quite a number of them. Thus, these Aztec ruins are definitely a place with the hell a lot of tourist traps, touts, hawkers, wannabes and notgoodforanythings.  The place with a huge offer on antique souvenirs made of Chinese plastic and original Mexican sombreros produced in Tchad’s Abéché. You name it, you get it – the proof of globalization at work. Thus, the place where you get all the stuff you even don’t want to present to your mother-in-law. Plus, the ruins.

Next to it San Juan de Teotihuacan: the small town. Rarely sees a tourist. Maybe they wonder why there are so many tour buses passing by. A place with the usual Mexican central square with a lot of shoe cleaners, some street food sold under the arcades, and …

… just 1 or 2 watering holes should a tourist ever get lost in this place.

The next morning, we start pretty early to the archeological site. To avoid the tour bus crowds and see the pyramids in the clear light of early morning. Well, the latter is rather an illusion. It’s simply too dusty – or there’s too much smog spilling over from Mexico City just 50 km away.

A steep climb to the top of the Pyramid of the Sun.

From the top a great view. Quite impressive the extent of the site and the dimensions of the structures.

Along the Avenue of the Dead to the Pyramid of the Moon, …

… on the way a glimpse of the famous Jaguar Fresco, then another climb up.

To discover the full extent of the Avenue of the Dead – 4 km long.

In the meantime, it’s already late morning. Of course, tourist buses from Mexico City start arriving. Disgorging huge groups of package holidayers. Mainly sexy senior citizens with a guide waving their national flag to avoid any confusion between the different herds of sheep. Fortunately, many of the guys are fully absorbed by the hawkers who start to convince the poor tourists pretty aggressively.

Still, some sights start offering the opportunity to queue up. Time for a siesta – until it’s getting quieter.

Late afternoon. Definitely it’s getting quiet again. The tourist buses are on their way back to the luxury hotels in Mexico City. The hawkers are getting tired and their valuable obsidian souvenirs are melting in the heat of the sun. Visibly they can no longer rely on the Chinese chemical works producing these masterpieces.

We visit the Pyramid of Quetzalcoatl in La Ciudadela – famous for its sculptures.

Well, that’s it for Teotihuacan. We leave it with rather mixed feelings. Of course, it’s impressive, vast, enormous, …

… on the other side all these side effects of mass tourism at its worst – maybe we’re simply no longer used to this. Probably tourists visiting Italy or Greece in the summer months experience similar situations every day.

We drive on. From the North East of Mexico City to its South West. To Taxco. Some 250 km, nearly 5h thru dense traffic.

A road which might be quite spectacular, along the volcanoes of Iztaccihuatl and Popocatepetl – both well above 5000m. So, it must be a panoramic route, …

… provided there’s not too much smog.

Whatever, we don’t see anything. Nevertheless, to make life more interesting, after some time we’re getting stopped by the State Police. Well, a friendly guy. We just have the enormous problem that we forget all our Spanish immediately and the poor guy doesn’t speak a word of English. Well, he’s not getting discouraged. Explains us, that we’re not allowed to drive in the State of Mexico with foreign plates at this time of the day. Somehow, we remember some regulations we read some time ago in a fb forum.

No need to mention we’re the friendliest guys the police officer met in his life. Nodding, smiling – but so dump, stupid, not understanding a single word (sorry Marcella’n’Laura from Lanzarote’s Language School) – finally he gives up and makes us a sign to continue. The only thing we understand instantaneously. And off we are – immediately.

1/2 h later – same story. The guy even shows us on an app the exact times foreign plated cars may not drive in the State of Mexico: every day from 5 – 11 am and all of Saturday. Now we know it. We’re just too dump to communicate it to the poor police officer. Whatever. He as well is a friendly guy and we’re off. In the meantime, it’s 10 to 11. We decide to wait these 10′ – and then drive on without further friendly encounters with any Mexican officials.

In the afternoon we approach Taxco. Looks like a beautiful village in Guerrero’s mountains.

Somehow reminds of an Andalusian village. Very different from the colorful places visited before.

With the slight difference to Spain that the majority of cars are really old VW Beetles serving as taxis: Roaring thru the narrow and steep alleys – not leaving much space to poor pedestrians.

Approaching the central plaza, the Zocalo with the baroque Templo de Santa Priscia.

Around the very lively Zocalo there are visibly incredible opportunities to buy whatever you’ll regret bitterly in a few days.

If you’re tired of this trouble, there are numerous small alleys to explore. Mainly uphill. Nevertheless, offering magnificent views over the village and the valley.

On the way some more churches to visit. Some clarifying in a pretty impressive way your destiny should you not detach yourself immediately from your existence as an incurable sinner.

Back to real life. Simply visit the very nice market. They sell whatever you may need – and a lot more.

In the evening the chance to sip a couple of beers on a verandah at the Zocalo. Observing life at the square, but …

… also, to state some slightly unusual security measures – maybe reflecting the current situation in Guerrero State. Well, maybe something else.

Definitely too many guys sneaking thru Taxco, all pretending to ensure security.

Some 3h to arrive. The suburbs look pretty modern.

The center – you immediately feel you’re in a great old city.

An impression that intensifies once you arrive at the Zocalo. The central square with the municipality, a lot of eateries’n’watering holes and the huge cathedral.

A baroque building – again the feeling everything is too exuberant. There’s simply too much of everything.

At night it even looks more impressive – especially when sitting in 1 of the upper floor bars sipping a beer and observing life below.

By the way – the incredible house with this exquisite illumination is the municipality: Not the house for gentlemen abandoned by their beloved girlfriend. This important institution is a little further out of the city center.

Of course, Puebla offers more than the Zocalo. Sneak thru the elegant streets to discover the local specialties …

… notably their famous sweets. You’ll choose among 100s of shops offering each 100s of varieties.

On Sundays visit 1 of the flea markets. You’ll find everything you never wanted to have. But who bothers.

Or, simply visit another masterpiece of baroque architecture – the Iglesia de Santo Domingo. Even if you can’t take it anymore.

Or, maybe even better – head for 1 of the specialties of Puebla – Mole Rojo. Red peanut sauce with chicken’n’rice. Pretty delicious, reminds us to Pàte d’arrachide in Mali.

When in Puebla, there’s another must-have-seen-sight: Cholula. Nowadays just a suburb of Puebla. Some 15 km west of town. It’s the best place to see Popocatepetl and a chance to visit a prehistoric pyramid under a church.

Strange but true. Climbing the pyramid is rather ascending a hill topped by a church: Nuestra Señora de los Remedios. It was built some 500 years ago by the Spaniards – probably to make clear who’s victory it was.

… on the other side Puebla.

And most important, the outlandish view on Popocatepetl. Should the sky be clear.

Well, it’s not. Nevertheless, the huge cloud of smoke from current activities is clearly visible.

Back to the pyramid. Of course, in Mexico a pyramid with a church on its top cannot be excavated as usual. So, the guys had to find another way to make at least some parts of the pyramid visible to the odd tourist: they dug some tunnels approaching the initial structure. 1 km is accessible to the public.

And that’s it for this post. Tomorrow we’ll leave the area around Mexico City. Moving towards the south. Thus, more adventures soon.

Ciudad de Mexico
On to Oaxaca'n'Chiapas