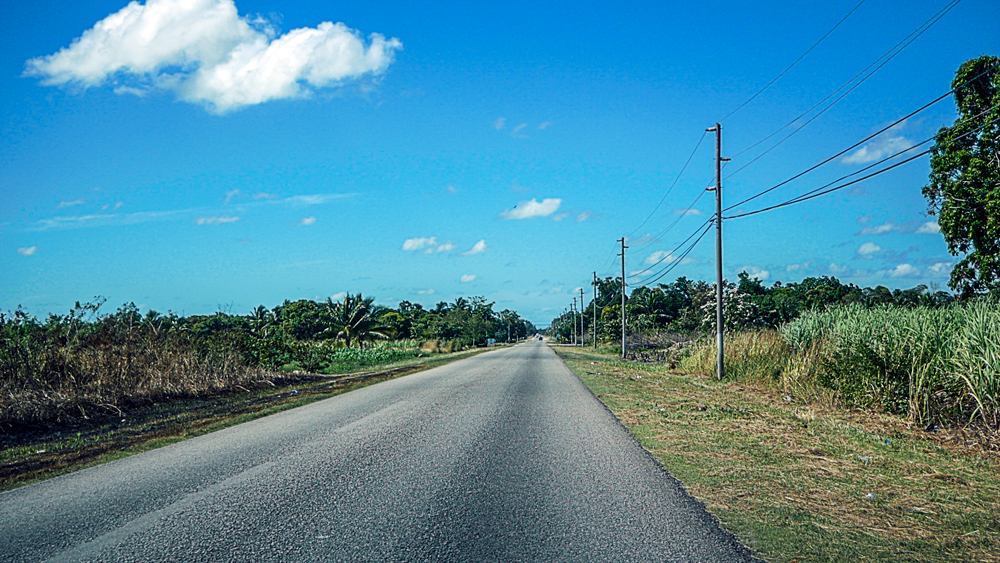 We visited the country for only 2 weeks in January 2020. It’s true, we did not stay a very long time. Nevertheless, considering the extremely small size of the country we considered it sufficient to visit most places of greater interest.

Here some practical information about the journey. For more ample details and pics please refer to our respective posts.

Kindly note all information given is based on our personal perceptions and observations. Of course, you might experience it in a different way and judge situations differently.

The Red Tape – you need to cross the border to visit

In short: very easy. Our experience at the border Chetumal – Corozal.

If you have a valid passport (at least another 6 months) and a small empty space on 1 of its pages it’s enough. They ask you how long you wanna stay. Even if you ask for less, they give you a month. Should you tell them that you’re on transit, suddenly they listen to you, feel slightly debased and give you 3-4 days only.

For your car: it needs a few additional steps.

Most important – disinfection. You drive thru a kind of car washing machine, get sprayed with a whitish liquid which is pretty difficult to remove later. Close carefully all windows as this stuff smells like immediate death to everybody. Then you’re stopped to pay for it. About 5 US$. Don’t loose the receipt. It’s an extremely important document in Belize.

Customs: show your car documents to the friendly officer. He puts everything he can identify in a computer. So far – business as usual. Then he takes his book with the forms for the TIP. He has to have 3 copies. Thanx to good old carbon paper he does not have to fill in the form 3 times. By the way, the same information he put into the computer he adds on these forms. But now handwritten. You sign the papers and get the original. Then your passport is stamped again. A stamp indicating that you arrived with your car. Thus, should you lose your car in Belize – need to lose your passport as well.

Outside on the parking lot there’s a gentleman selling a small piece of paper to all motorists for 15 US$. A kind of entrance fee for cars.

Then you pass a last checkpoint – they’re checking the all-important receipt for disinfection and the car’s entrance fee.

Finally: your car needs an insurance for Belize, it’s mandatory. Easy, in the building with the blue sign some 200m behind customs. 1 month for 30 US$. You get a kind of handmade sticker on the windshield.

Then you’re free to explore Belize.

On the way out of Belize (San Ignacio – Melchor de Mencos): Pay 20 US$ pp as a kind of exit fee, then you’ll get a stamp of immigration, another 1 from customs. And you and your car are out of the country.

Well, this exit fee seems a little strange to us. But we’ve not heard of anybody who could avoid it.

Language – it’s worth not to sleep during school’s English lessons.

Despite the fact that most Belizies speak Spanish, English is the official language. Thus, for most of us somehow feasible to manage.

Money – you definitely need it to survive

The official currency is the Belize $. It’s fixed to the US$ at the rate of 2 B$ = 1 US$. You can use both currencies as you like. Nevertheless, everything in Belize is prized in $. So, at least in the beginning be sure what they mean by it: US$ or B$. It’s a difference of 100%.

And don’t be astonished: everything in Belize is much more expensive than in the neighboring countries. Especially accommodation and even more important – beer. Count at least 2-3 US$ for their super small (285 ml / 10 oz) bottle of beer. Thus, come with a considerable amount of money to avoid any rupture of your beer consumption.

Should you need more money, just go to an ATM. There are many of them, mostly asking a fee of several US$ and 1% of the amount. To avoid that, there’s Atlantic Bank. Everything is free. Google can tell you where’s the nearest 1.

Belize has pretty good, albeit rather narrow roads. And most of the time you’re the only 1. Should there be a little more traffic, just remember the rules in Mexico and you’re fine. Even if Belizies use a little less the warning lights.

Know that only the principal highways are paved. Other roads may be a little rougher to drive.

Your car cries for some treatment – Mechanics in Belize

Belize is a relief for overlanders having traveled thru North America with a car not assembled in the US or Mexico.

Contrary to mechanics in the north in Belize they will know your car. They can even identify it by the VIN and normally you find all spares you may need. Your car is back to the normal, globalized world.

Some representatives of principal makes are present in Belize City or in the country’s proud capital Belmopan. But normally, they’re largely ignored by everybody.

With regard to car doctors Belize works differently – thanx to the Mennonites. Especially in the village of Spanish Lookout live so called modern Mennonites open to technical development. Thus, there are several well equipped car repairs with skilled mechanics as well as huge shops for spares.

We went there to have Prado checked and some parts changed. Spares cost about the same as in Europe, labor is pretty cheap. It’s true, Mennonite society may appear unusual to you; limiting communication to technical aspects of car repairs may minimize the risk of discussions about issues out of your world.

Just get a Belizan card. It’s easy’n’cheap. Need your phone, the passport, some money and an office of DigiCell. 20B$ for 3GB and calls during 1 month. Don’t remember if there are any cost for a SIM card. Works well everywhere.

Security – are There Many Bad Girls Developing All Kind of Activities?

As usual security is an issue of many controversies among travellers. Still in Belize it’s less discussed than in Mexico. Still there are areas considered pretty unsafe: Belize City, especially its south side. Unfortunately, it’s mainly gangs related violent crime.

Another slightly unruly part is the border region to Guatemala. This due to ongoing political disputes between the 2 countries. This issue could be important for you should you drive to the Maya ruins in Caracol. As there are many tours from San Ignacio driving there – more or less in a convoy – you may just follow them. Note that you cannot stay overnight in Caracol.

Outside these areas it looks much more peaceful. Still, there are cases of tourists disappearing – of course, could also be for other reasons.

At least we never had any security problems in the country. Maybe except some disturbance at the beach in Hopkins when Monika sneaked alone at the beach.

Mexico - Yes, We'll Visit
Guatemala - So Much Better Than its Reputation

Ecuador – No Idea Why It Is a Country Less Traveled
8. September 2022

Guatemala – So Much Better Than its Reputation
8. March 2020